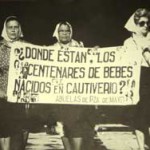 ROBERTO G. VAREA will outline the work of Abuelas de Plaza de Mayo (Grandmothers of Plaza de Mayo,) an Argentine NGO created to find children abducted by the military during the dictatorship (1976 – 1983) and reconnect them with their legitimate blood relatives, and elaborate upon the Abuelas’ strategic use of theater to aid them in their mission, through their partnership with the cycle Teatro por la Identidad (“Theater for Identity,” or TxI.)

A brief genealogy of Argentine politically engaged theater will be outlined, placing the TxI movement as an heir to the socially engaged Movimiento de Teatro Independiente, of the early 20th century and, in particular, to the landmark Teatro Abierto cycle, which openly defied the military dictatorship in 1981.

First developed in the year 2000, the partnership between Abuelas and TxI creates a unique model of effective collaboration between theater artists of conscience and an organization that is a key referent in Argentina and internationally, in the struggle for human rights. 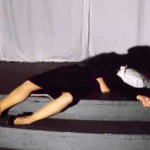 SANJA IVEKOVIC directs dancer Sonja Pregrad in a new performance of her signal work, Übung macht den Meister (literally translated: Practice Makes a Master) that stages a young woman’s mis-performance of mastery. Originally performed in Berlin in 1982 by Ivekovic herself, the work was recently revived for the re.act feminism exhibition in Berlin. Tom Holert has described the performance: “It is a disturbing, repeatedly discontinued sight. A female human body clad in a black dress, its head covered with a white plastic bag while it stands, stumbles, falls, lays down, stands again, poses, crumbles, falters, falls, lays on the floor, the legs stretched, stands again, and so on. …. we are supposed to witness or apprehend the staging of a process of learning – that, as spectators, we learn in this process that achieving mastery could be in itself a relentless, consuming and aimless task, devoid of any gratification, of any promise of progress.” This performance is also part of the East Dance Academy shift of PSi#15. In CHAE, ELENA MARCEVSKA leads the audience on an “how-to-map-motherhood” journey through the streets of Zagreb. Marcevska has been working with Roma mothers who are begging with their children on the streets and intersections of Skopje, Macedonia. A new mother herself, Elena writes, “…they (Roma mothers) are judged by the majority of passers-by as bad mothers (mis-performing mothers). But what is the story behind this? They don’t have health insurance, most of them are victims of family abuse, they are often minors, or very young and this is the only way they know to survive. …CHAE examines the cultural, social and political issues relevant to policy debates surrounding the increasing labor force participation of mothers.” The performance reveals the ways in which, by necessity, motherhood is “mis-performed” within the public spaces of the city. 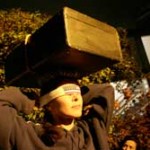 VIOLETA LUNA presents Border TRIP(tych) Parts I & II: Shrapnel of Remembrance, fragments of the first two sections of a larger, complex movement, sound and media-based performance-art piece. The TRIP(tych) focuses on two aspects of immigration where the migrant’s body takes center stage: Its status as “illegal body” and its reduction to a “working” body. Luna explains that, “Host countries with continuous flows of migrants—such as US, Italy, or Spain—use a politics of fear, presenting the immigrant as the enemy…the body of the migrant is stereotyped, reduced in expression, their ‘corporeality’ a mere tool for work, a producing machine…. I am interested in wrestling with this issue of the ‘corporeality of the migrant’ …elaborating an alternative vision highlighting the creative potentiality in the body of the migrant as a being capable of self expression, of seeing, feeling and acting on these impressions.” 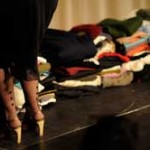 TANJA OSTOJIC has devised Misplaced Women?, a delegated performance in which women volunteers carry packed suitcases in the public spaces of Zagreb, repeatedly pausing to pack and unpack as they move about the city. In this project, Ostojic enacts an everyday life activity that signifies a displacement as common to transients, migrants, and disaster refugees, as it is to the itinerant artist traveling the world to earn her living. Ostojic’s street performance continues themes of migration, desired mobility, and relations of power and vulnerability in regards to the mobile female body, found in much of her previous work 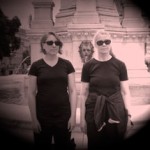 SUBROSA will be performing and mis-performing hospitality and maintenance work throughout the shift. We will misread the boundaries of the conference grounds and its expected gender and labor roles. WO_KOLEKTIV has been at work uncovering missing histories of Croatia’s feminist and women artists and bringing them to public television in Zagreb. They’ve been misfiring in public spaces for a number of years now, making demands and spaces for feminist education and queer culture. 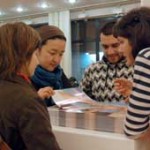 IVA KOVAC will present documentation of (Re)production, a performance that deals with “placing a women as a biological reproductive organism within the art system and vice versa. ”The work was initiated by a statement in some of the exam literature at the Academy of Fine Arts where I read that ‘women don’t have the urge to create art because of their ability to bear children’.”